Dr Tim Marsh PhD, MSc, CFIOSH, CPsychol, SFIIRSM is MD of Anker and Marsh. Visiting Professor at Plymouth University he is considered a world authority on the subject of behavioural safety, safety leadership and organisational culture. As well as many of the world's most recognisable industrial names Tim has worked with diverse organisations such as the European Space Agency, the BBC, Sky TV, the RNLI and the National Theatre in his 25 year plus consultancy career. He has key noted and chaired dozens of conferences around the world including the closing key note at the Campbell Institutes inaugural International Thoughts Leaders event in 2014. He has written several best-selling books including Affective Safety Management, Talking Safety, Total Safety Culture, the Definitive Guide to Behavioural Safety and Organised Wellbeing. Previously he led Manchester Universities ground-breaking research team into behavioural safety methodologies in the 1990s.
October 19, 2018 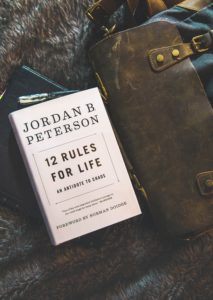 Jordan Peterson is a hugely contentious about gender differences – but he does make an interesting point about the benefits of risk appetite.

It is said that back in the days when only Volvos were designed for safety you couldn’t take one to the Isle of Man during TT week without getting it scratched. Motorcyclists were apparently aware of an insurance study showing that they were significantly more likely to be killed by drivers of Volvo cars than any other. This could have been because bad drivers tended to buy Volvos but is far more likely to reflect risk homeostasis theory – IE that we have a certain risk appetite so the safer the car the riskier the driving. (This all before omnipotent speed cameras and European design standards).

You may not have heard of the modern academic / YouTube sensation / author and provocateur Jordan Peterson – but, as the Sunday Times recently said “you need to know that basically Millenials think he’s God”. (Think the bastard love child of David Attenborough and Katie Hopkins). His recent book 12 Rules for Life has a chapter that covers risk in a way that makes clear he fully understands risk homeostasis theory – with Peterson suggesting that our, at times, alarmingly healthy risk appetite is both inevitable and, indeed, necessary for our rather over achieving species to flourish.

His view is that even more than wanting to stay safe, people want to develop competence. This because we know, if only instinctively, that “it’s competence that makes people as safe as they truly can be” as we need to master fear and the hostile environment. He suggests that ‘Kids need playgrounds dangerous enough to be challenging’ else they’ll either stop playing in them or play in them in but in creative and unintendedly dangerous ways. We’re “hard-wired to live in the edge” and to enjoy risk as it makes many of us at least feel “invigorated and excited”.

In the classic Dustin Hoffman film Marathon Man the lead character pays a street gang for help with a logistical problem but warns them ‘but I have to warn you it could be dangerous’. They leader of the gang quips (I paraphrase) ‘you’re not getting a discount just because it’ll be fun!’ There are similar exchanges in many other films.

The problem with being overly ‘molly coddled’, says Peterson in 12 Rules for Life,  is that we will “lumber around, sloth-like, unconscious, unformed and careless. Overprotected, we will fail when something dangerous, unexpected and full of opportunity suddenly makes an appearance, as it inevitably will”. He’s not the first person to make this argument (see Frank Furedi, author of Culture of Fear and others) but he’s certainly the first who is considered a genuine thought leader for a generation.

Recent research at Cranfield University has looked at the concept of a risk culture – and specifically that of risk sub cultures. For example, of Deepwater Horizon the management were very aware of the dangers of slips and falls and managed that assiduously. (Being aware of the fact that more people have been killed in falls than have been killed in process safety incidents). The workforce on the other hand were more concerned with process safety issues which management seemed oblivious too or even creatively dismissive of. (‘With the ‘bladder effect’ an ‘explanation’ for unexpected readings).

What would have helped here would have been coaching based on data and illustration RE the risk of falling and mindfully listening (to workforce concerns) respectively. Certainly a ‘safety differently’ advocate would say that effective, objective, analytical two-way dialogue is always essential.

Why it’s important for society generally takes us into some contentious political water so it’s worth stressing – especially to my many friends in the ‘Women in Health & Safety’ group – that the following text from 12 Rules for Life contains direct quotes and paraphrasing of Peterson’s thoughts.

The positive and non-contentious side of Peterson’s ‘men and women are different’ observation was summarised by the late great safety campaigner Ian Whittingham MBE who used to quip that ‘safety needs more women’ observing that ‘they simply don’t often put up with the crap that men do!’

More contentiously, Peterson says that though it’s not all they should do basically “men should be men” and look after their families. (I know, I know … and we’ll come back to this!) but directly relevant for risk management and with reference to Ian’s observation adds that “a man should not be a child”. Specifically, he means that men should be independent with neither sex having much use for ‘dependent’ men. Men, he says, “enforce a code of behavior on each other when working together. Do your work. Pull your weight. Stay awake and pay attention. Don’t whine or be touchy. Stand up for your friends. Don’t suck up and don’t snitch. Don’t be a slave to stupid rules. Don’t be dependent. At all. Ever” He adds that “the (low level teasing) and harassment that is (so often) part of the ‘initiation’ at work is a test. Are you tough, entertaining, competent and reliable? If not, go away. Simple as that”.

Real life experience suggests he’s not entirely wrong here as anyone who has ever worked on an oil rig or similar can testify. (Or read a book like Paul Carter’s Don’t Tell Mum I Work the Rigs). Right or wrong this is, to a great extent, how it is and has always been. (Whether it always should be is another matter entirely).

For example, a meta study of tens of thousands of Americans by Martin Seligman, the king of ‘Positive Psychology’ and a guru of the positive safety field, showed that positive people, low in fatalism and with a high locus of control bring lots of positives to the world of safety. They pay more attention to training and are, for example, ‘first in the hurricane shelters’. They contribute better ideas to accident investigations and show more pro-social ‘above the line’ SHE behaviours. They also have as many accidents as negative people even though negative people are far more fatalistic. I challenged this as ‘impossible’ but the figures are clear. The reason has always been staring us in the face and is entirely congruent with Peterson’s view or risk tolerance. Positive people get stuck in and, in Peterson’s terms, are simply pushing hard as, he would say, they always have and always will.

To return to his more contentious assertion the following quote makes clear Peterson’s view that ‘men should be men’ and more importantly that society can’t function without it. He puts on his tin hat and suggests:

“(Emotionally) healthy women don’t want boys. They want men” and anything that “interferes with boys becoming men is no more friend to woman than it is to man … if you think tough men are dangerous (consider) what weak men are capable of”. As above, his view is clear: that risk taking behavior, especially in younger men, is part of learning to become a capable, competent and productive member of society. He justifies these observations and is honestly not channeling Alf Garnet and Donald Trump but rather Dawkins, Barash and other socio-biologists who see roles in society as both overlapping and diverging but of equal value. (Again, this is his definition of emotionally healthy and adult!).

His view is that attempts to socially engineer society’s structures cannot entirely supersede millions of years of hard-wired physiology. More than that, that the social structures that have developed over the centuries have done so for a reason and have allowed huge, mostly positive advances for the species and that trying to force change will cause unintended consequences.

It’s worth saying, however, that even if he’s correct only to an extent, denying this (part) truth reduces the objectivity with which we understand the management of risk. This is vitally important as it is a law of nature that the objectivity of our understanding puts an outer limit on the efficacy of our response. Especially when we seek to avoid unintended consequences. For example, and again talking about young men, a UK civil servant once published a league table of badly behaved football fans. To his horror, they weren’t shamed into good behavior as he’d hoped and this became very apparent the weekend of the first top of the table clash!

The world of safety excellence, particularly in the field of Human Error management, has long known that education, rules and systems and even legislation is just the basics – the necessary but not necessarily sufficient. Its astute design, empowerment and facilitation that’s key.

So millions of years of physiology in one corner but very clever thoughtful and creative people in the other. Formula 1 racing is perhaps a good example of what we need to do to square the circle. Drivers (again, usually, but not always, young men) will continue to want to race around at 200mph for the excitement and to ‘test’ and ‘prove’ themselves and to show ‘mastery of risk’. Regardless, by applying robust and practical design principles we’ve managed a quantum leap forward in the reduction of deaths and serious injuries. (In Formula 1 from around two a year for decades to one in the last 20 years). No one has slowed down.

In short, risk is risk but the management of risk is another matter. Scrap the advances in legislation and culture we’ve made generally and, as in many places around the world still, within years we’ll be back to losing two men a mile when building, such as the Manchester Ship Canal. The key point Peterson would make is however, that there would still be (mostly young men) queueing for work around the block and laughing and joking as they do. More than that he’d suggest that without that potentially deadly mentality this article would have been painted onto the wall of a cave.

Does the equality maxim of ‘gender neutrality’ put women at greater health and safety risk?