The 2018 winner of SHP’s International Rising Star in Health & Safety has been announced at the Safety & Health Expo.

The award, open to anyone under the age of 30 that is not based in the UK, recognises members of the next generation in health & safety who have demonstrated excellence in their roles. This year’s winner is Sanjay Rajasekaran, Group Safety & Health Manager at Tata Sons Ltd in India. Sanjay was presented his award by John Green from Battersea Power Station.

A list of nominees was whittled down to a shortlist of finalists, from which a panel of experts selected Sanjay as the ultimate winner. 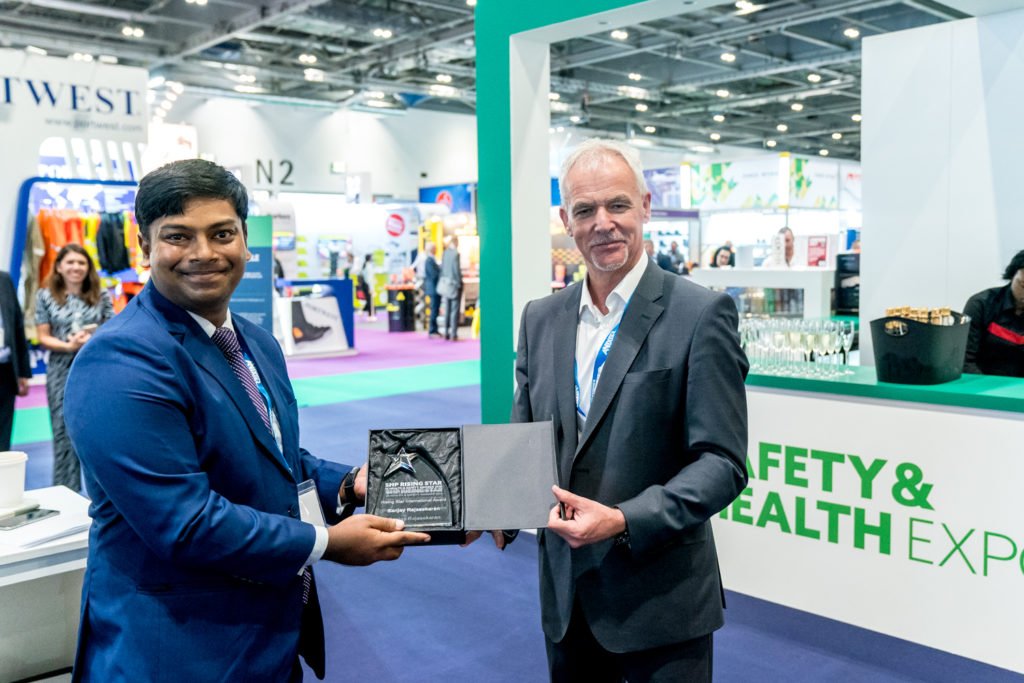 Sanjay was part of the eight-member global team that created the Safety & Health Management System Framework for the Tata Group, India’s largest industrial group. Sanjay integrated into the team, which consisted of representatives from across the world and a range of high-profile companies, to play an integral role in the project being completed in a record time. He has also worked with cross company teams in co-creating Tata Safety Standard for the group and developed training content to accompany it.

Sanjay has, says his nominator, done “exemplary work” in enhancing health & safety across the Tata Group, working on projects leading to a greatly improved health & safety culture within the group’s companies. As the Group operates across a number of sectors including retail, steel, mining, automotive and construction, Sanjay has had to provide simple and effective cross-sector solutions using a keen business understanding.

An example of Sanjay’s versatility, which particularly impressed the judges, comes in his work for Tata Coffee, where he has devised solutions to man/animal conflict on coffee and tea estates that had resulted in serious injuries to workers. Sanjay also worked in helping address the unique risks of working at height in trees in the agriculture industry. These projects were beyond his regular scope of work but he helped in coming up with solutions in these companies.

Despite the wide remit of Sanjay’s work, he has also sought to help spread health & safety awareness throughout industry and the wider public, volunteering at schools to give sessions on safety and taking on an active membership of ASSE. For the past three years, he has organised the Tata Best Practices in Safety Conclave, bringing participants from over 40 companies together to share skills and best practice.

The judging panel noted that Sanjay was a ‘very credible’ candidate and they highlighted his impressive level of public speaking, for someone of such a young age. It was also noted how Sanjay is ‘standing up for himself in doing very some different work and is inspiring sub-continent professionals, speaking at and organising conferences and working with children.’

Congratulations to Sanjay and all of this year’s finalists.

Earlier in the day, Jyssica Murphy was named as SHP’s UK Rising Star of 2018, while Tina McGennity was announced as the Biggest Impact award winner.